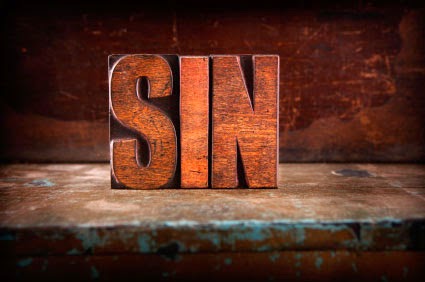 What is Sin?
To begin with, sin is a word that is often considered taboo in today’s society.  The concept of sin is written off to human mistakes, illnesses, and irresponsibility.  It is rarely seen for what it truly is–moral guilt.
The Church has several theories concerning sin that encompass at least some of the total Christian doctrine concerning sin.  These ideas are as follows:
We must remember that sin is unnatural, but that humanity has a propensity towards sinning because we live in a fallen state and our very natures have been corrupted.  God did not make sinners; rather, His creation was good and later it became corrupt. Sin is not always fully deliberate or voluntary, and some people may not know they are sinning in regards to every sin they commit.  Some sins are deliberate; some may be the result of ignorance.  Let it be known that once someone knows that a certain action is sinful, there is no longer room for ignorance when that sin is committed.
Humans are sinful in their natures, thus God is not merely saving us from the things that we do, but He is saving us from who we are.
Sin originated with the choice of Satan, who then enticed humans to freely choose to disobey God, and because of the choices of Adam and Eve, man is now inclined to sin and cannot help but to do so. After the Fall, all humans were to be born separated or alienated from God, and would face guilt, suffering, and death.
All humans are born as depraved individuals.  John Calvin believed that original sin was a hereditary feature that corrupts all human beings in their souls; it makes all people subject to the wrath of God. Walter T. Conner later described human depravity as not only the ability to sin, but also as the inherent tendency to do so because of man’s moral weakness. It is inevitable that all humans will sin.  Total depravity can be understood as the corruption of every aspect of man’s being; man is unable to deliver himself from the power of sin.  Sinful depravity has corrupted our nature, but it has not caused us to lose our value.  God still values us, and while our image of Him is broken, it is not absent.
Christianity and the Age of Accountability
As was already noted above, humans are not always conscious of their sins, but they do become conscious (at least of certain sins) over time.  There is some question as to exactly when this conscious awareness of sin occurs.  Some theologians have argued for an age of accountability.  This idea is generally argued for the purpose of wanting to believe that children who die at a young age may be allowed to enter into God’s presence in the eternal state.  Some see infants and young children as depraved, but not as sinners or as being guilty.  This view is known as the age of accountability view.
Another view is the theory that the redemptive work of Christ is applicable and efficacious to infants and young children who die in infancy or early childhood.  The idea is that these children cannot yet understand the Gospel, and so they must wait to receive it until they are old enough to understand it.  Consequently, children who die before they receive the Gospel and who cannot understand it can still rest in the promise and grace of God.
W. T. Conner espoused a third view which is somewhat of a combination view.  He believed that young children were not sinners or guilty until they reach the age of accountability.  Thus, when young children sin, they are not accountable.
The Need for Repentance
When someone becomes conscious of sin, that person recognizes his or her willful disobedience and pride.  Niebuhr identified four kinds of pride: (1) powerful pride (relating to the social status of groups and/or individuals), (2) intellectual pride (forgetting that all our knowledge is finite), (3) moral pride (self-righteousness), and (4) spiritual pride (self-deification). Secondly, consciousness of sin is intended to lead to repentance.
Sinners are alienated from God; they are at enmity with Him.  Sinners are in bondage and are not free in the truest sense of the term.
God must, in His divine grace, take the individual from corruption to renewed righteousness.
Humans who are alienated from God will face God’s wrath if repentance is not realized.  The wrath of God results in both physical and spiritual death.  Spiritual death is commonly understood as spending eternity in the Lake of Fire (Hell), where the individual will eternally suffer.
God intends for humans to act justly towards one another in love.  The opposite of this is to act unjustly towards one another out of hatred. Sin causes people to become hardhearted, and ultimately it leads to disaster.  Pharaoh in the Hebrew Scriptures may be one of the most illustrated examples of this.  As his heart became harder, it ultimately led to the death of his firstborn child.  Beyond this, he had eternal consequences to pay as well.
What now?
I want to encourage you to spend some time in prayer asking God to reveal to you attitudes and actions in your life that need to change.  Think of things you can do to make those changes, and remember that apart from the strength of the Holy Spirit in your life, you cannot do anything.  Do not let your heart become hardened to the conviction of God’s Spirit, but instead allow Him to conform you to the person He wants you to be.